​I have put these both together. One I highly recommend for your mental health as well as supporting your career. We are no different to everyone else. While you are busy looking for the batch number on your local anaesthetic, a teacher or a policeman or a doctor, well most people, fill in details that they think are mostly irrelevant. An awful lot of CPD was not available in 1980s generally it was called common sense. There's been a huge increase in University degrees, but there isn't one on common sense. I do remember taking the Hippocratic oath when I qualified, and although written 2500 years was brief and concise as it was written in stone with the inability to cut and paste. A bit like when we had handwritten record cards and had to write briefly. EXAM S&P 2bw PINTA DNR! 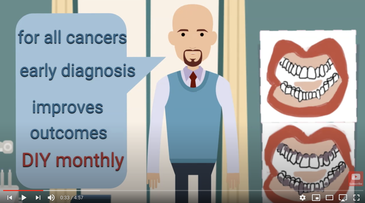 A very healthy friend went to see his dentist, fortunately not me about a problem with his throat. A few days later, he was treated for his oral cancer. I've been cycling With the Dean of Bristol dental school, and he agreed to give a talk to our peer review group. We need to check ourselves every month. And so do the rest of the public.
Its why the front page says "save a life SHARE teeth4life". Our friend was so lucky to be seen and referred so quickly, and we are still able to go cycling. 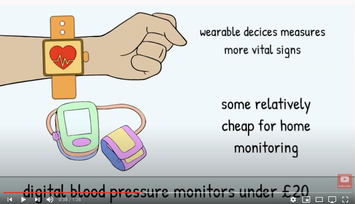 A local GP came and gave a talk about sepsis. It was fascinating in the insight she was able to bring having suffered from it herself. It got me thinking that a lot of the devices necessary to make a score on NEWS we can fit on a routine trip to our practice. NEWS is an acronym for National Early Warning Signs used at the time by some paramedics to assess A&E priorities. Since then your watch can give a full ECG, not just your pulse.
And regarding telemedicine bathroom mirrors have already been developed to monitor your health each morning,  not how shattered you look. In my lifetime, as predicted in Snow White, a talking mirror may tell me to go back to bed while it sends for an ambulance. It may be programable to lie and say look great though. 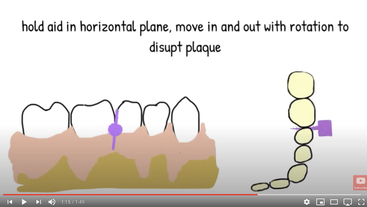 I have had a few meetings with friends and colleagues for feedback. The best one was by my son, as i had initially thought a Smilelite to use. Its a F***** S**** idea no one will let you touch their phone, and as I realised not many associates would pay for the light. It's a good product, though. I now have one for sale.
The other was nobody likes looking at real mouths. Hence the animations. A Perio update mentioned a specific motion. It took me over an hour for the five-second clip here.

We have an excellent endodontist in Bristol, and he agreed to give our group an update. However, he was injured in an activity far more important, playing five a side and cancelled at short notice.
I have had some problems outside of work, and recently completed this course via Furelearn and gave a talk on it. A simple keynote and group discussion. I explained how I liked to exercise and to talk to friends, others pilates, some cooking, and it went quiet when one mentioned drinking. Well, we all seemed to like a drink, the best discussions are in the pub after our peer review meetings (which do carry CPD). It's a shame that we are all zoomed out, and one day we can have our peer review, and still go to the pub. If you know someone who has a problem, I can't recommend AA highly enough, as well as al anon for those who know someone with the mental illness. Often it's the carers suffer more.
The government offices in Whitehall have never trusted dentists, and there are many instances that they had good reason not to. But the silent majority of dentists do the right thing and want a reasonable standard of living and sleep of a night. Unfortunately, we have been dragged down to the lowest common denominator over many years regarding the NHS delivery system. Now is a great time to promote positive change, and let the professionals take back some regulation and provide some form of basic service for the public, and not rely on the top 10% who can afford alternative payments for treatment. ​ 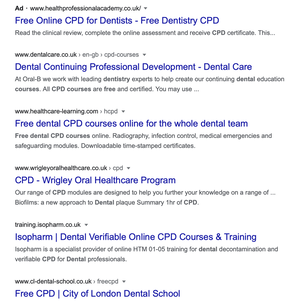 Continuous Professional Development applies in many professions. The planner is good in allowing you to pick up on certain areas. But in fairness, why do we need five hours on radiography and some of the corporate videos on common sense which are to cover their backs serve very little purpose, just a further impact on your time and stress levels.
When I qualified, I was a Mister, but about ten years in we were after a pay review when rather than getting an increase we had the title Dr. ( I may be mistaken, we may have hada small rise?).
The GDP's that changed their brass plaques first and their entry into yellow pages were the equivalent of the GDPs today who do all their CPD on line watching the football with a beer. I prefer peer review. Start your own group and zooming now, until we can meet safely in a pub.
It Is disheartening to see such little uptake. The impact of AI on these machines makes them a huge asset to any business. In Vegas in 2005, the term Volks crown was coined. It was five years ago. Not everyone can afford £900 a crown, and these Volks crowns can be made in a single visit in under an hour. Your staff could also easily use it to generate an income while you aren't in the room. If anyone knows how to organise SDL files, and wants an alternative income then get in touch. While eMax crowns made on milling machines, soon you will be able to make aesthetic crowns on 3D printers. You will probably use the scanner to take the shade accurately, but fortunately it's a while before a cobot will be developed to make the prep.
T&C LEGAL